This summer I went with a few members of the local CBBAG chapter to the Stratford Perth Museum where we took part in an afternoon letterpress workshop taught by Mike Pomeroy. I learned a ton! It was really fun and I loved it; we’re hoping to organize a two-day workshop so that we can work on the big press next time (this time we only did a small print on the proof press).

Pictured in the photo below is the iron hand press (largest press you see on the left), in the middle the Kelsey press (also called platen press) and the proof press is the one on the right with the roller. 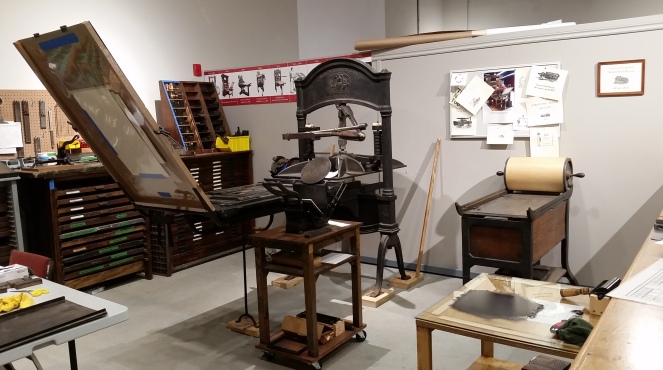 So, first things first, we went over a lot of terminology. It was a whirlwind lesson and I’m sure I missed things but I did my best to keep notes.

First, we went over the Type Case also known as California case – which is all the upper and lower letters together in one tray. Before they had one tray they had two layers, the uppercase tray and the lowercase tray. To make traveling easier way back when it was merged into one tray. Some sayings in the letterpress world we learned were “Mind your P’s and Q’s” because they can look so similar (they are kept far apart from each other in the tray) and each letter is called “sorts” so if you’re out of a letter, you’re “out of sorts”.  The most used letters are kept together in the middle of the tray.

Next, we covered everything else we would need! Here they are:

Composing stick: (the second item from the top, just outside the iron frame) This is what you would place your letters in and compose your sentences in before moving them into the chase.

Furniture: (the wooden blocks you see to the left of the rule) The thicker one is known as furniture, this surrounds the type in the chase and holds it in place.

Reglet: (the skinnier piece of wood you see to the left of the ruler) Serves the same purpose as furniture, just thinner.

Chase: (large iron square) This is what you put all your type and furniture in; it frames it all.

Quoins & Keys: (key is the object at the top of the photo; quoin is the object to the right of the ruler). Keys and quoins are used to lock everything into place so it doesn’t move.

Galley: (not photographed) Galley is a large metal sheet used to transport the chase (with everything in it) to the press.

When everything is all complete and together it’s called a “form”. 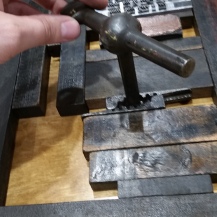 I had chosen a rather long phrase and the instructor thought it might be too long for our little afternoon project but I was able to finish at the same time as everyone, despite even needing to start over when he decided I should use a smaller type! The first I had was rather large and wouldn’t fit the whole phrase nicely into the composing stick and chase.

It’s off to the press! First, we got the ink ready and then the instructor helped us move our forms to the proof press. Below in the photos you can see the ink/roller (top left) and beside that (top right) you can see the galley and how it is used to help bring the form to the press, the form can be slid from it and onto the press. Next the form is secured in place with magnets (bottom left) and then inked, once the ink has been rolled on the paper is lightly dropped on top of it (bottom right). 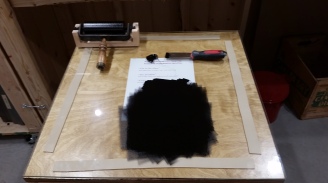 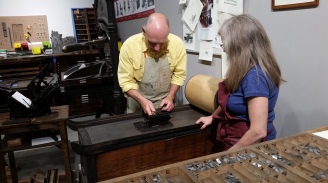 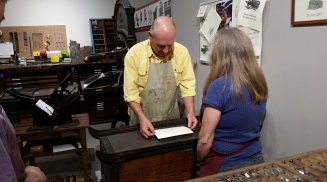 With the paper on it is time to make a copy! For the proof press a large roller is rolled over everything. This presses the paper onto the form and allows the ink to transfer to the paper.

And it’s as simple as that!

A proof press would be used to make a quick copy so that you could see if there are any spelling errors or if something isn’t working right. Once you’re happy with your proof copy you’d move everything to the big press. For this workshop, we only used the proof press, the larger press is used in longer workshops – which I hope to take!

Here is a photo of the print I did. It’s one of my favorite quotes by André Gide. He didn’t have any ships or boats, so I decided a train was the next best thing!