Recently I’ve been asked to make miniature books for a local University. They would like to have their University initials on the front over. I agreed and was talking to Dan about it and he’s been very helpful in teaching me several things, to give me a few options for how I would like to put the letters on the cover.

First, he had me making a little stamp out of board.

Traditionally he said this technique was done by the Japanese and with wood – we just used binder’s board (Eska board in this case). It was just a matter of slowly cutting and chipping away the board layers till the letters stood out.  In the photo, you can see one that has been started and one that hasn’t been started. I made two, each with a different size font.

I used a woodcarving knife from Dan’s wood kit (he used to do woodworking) and slowly chipped away at it. The letters had been printed on paper and that was glued onto the board for guidance.

Below are a few photos of the process: 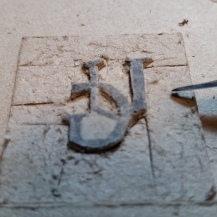 As I got a little further along and began to think I was nearly done we pressed the stamp in an ink pad and just stamped paper. This allowed me to see what parts of the board were still too high. Anything that came up black and showed on the paper would mean that it would show up when I pressed it into the paste paper I’d be making later.

In the second photo, you can see that there is less black ink around the edges of the stamping compared to the first stamping. It was a process that required a fair bit of patience as you didn’t want to accidentally cut through your letters! Because it is board, it is very fragile. It also won’t hold up under moisture for very long. Dan usually puts an acrylic coating over his, but I didn’t do that prior to using mine and they did begin to fall apart while I made paste paper.

Making paste paper is relatively simple, and it is the oldest form of decorative paper predating marbled paper. It is made by mixing paste with pigments and basically painting it onto the paper before using combs, fingers, brushes, and other tools to create designs. It is said that bookbinders would throw color into their leftover paste and make a few sheets of paste paper at the end of their work day to get as much use from their paste as they could. Working with paste makes it possible to stamp in designs! This allows me to get the stamp I created directly into the paper; it dries smooth and looks nice.

For a tutorial on paste paper check out Lili’s Bookbinding Blog for her Paste Paper Tutorial.

When I did the paper, I used two methods. The first I did was methyl cellulose and acrylic paint (the photo with red, blue, yellow). The second I did was the traditional wheat paste and I mixed it with ink (the photo with blue, green and purple). 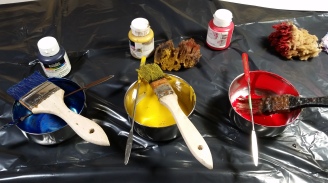 Overall, I preferred the paste and ink, it was a little easier to work with in terms of combing and design. Both methods achieved the same end results though.

Just in terms of what I did: I would start with a base color, let it dry and apply a second color on top. This allows the base color to show throw after you comb through the wet top layer.  I also used sponges to get a sponged effect, again with a base color and a top color. Paste paper has no end to the things you can try, and it allows for a lot of creativity, just remember to have the patience to let layers dry! 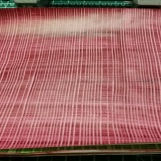 Of course, I did also make a few with the UG stamp, however, since my stamp wasn’t coated with anything to protect it from moisture it did start to fall apart a little after it was used a lot! It still gave me a good sense of how it works with paste paper and going forward I can make a new one and make sure it’s coated. I will also continue practicing with the paper to get better at achieving the look I want!

Support me on Ko-fi

If you are enjoying this content and would like to help support my bookbinding journey please consider a small tip! I’m currently saving up for a working miniature nipping press. https://ko-fi.com/ariellesbindery