Over the past two weekends I took part in a course offered by CBBAG. It is one of the core courses in their curriculum. The course was the first half of Repair & Restoration, this half focused on cloth and paper bindings. The second half of the course focuses on leather repair and won’t be taken until we have completed Bookbinding Level 3 which we hope to do in Spring.

The course was four days and we learned a lot, I don’t even know where to start in covering what we learned. Everyone brought in their own books to work on and so everyone was working on different problems. The point of this course was to introduce us to common problems and common solutions, while seeing what everyone was working on so we could see as many repair techniques as possible in our class.

You might be wondering what the difference is between repair and restoration. Repair to a book prevents further deterioration and makes the object usable. It doesn’t take the final appearance into consideration. Restoration on the other hand is more extensive, it includes documentation and may include touch up to the color or tooling. With restoration you’re looking at what the book will be used for and what people will pay for!

Most of what we did in class was repair – making the book usable and preventing further deterioration, simply because restoration would take so much longer!

I’ll give you a brief snapshot of some of the stuff I worked on. 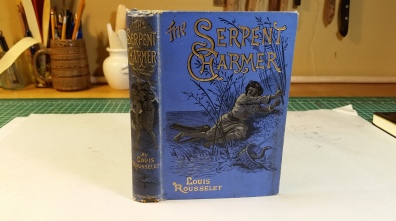 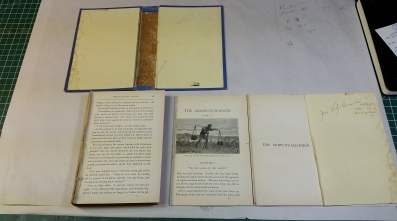 The book I choose to start with was The Serpent Charmer by Louis Rousselet. It’s from 1890. First I took before pictures! In the first picture you can see the cover. The head and tail of the spine are rather worn but over all the cover is in good condition and in one piece.

Second picture is anther before shot. The text block came entirely out of the cover, the first two sections were loose and the end paper was out as well.

The first step was to remove the old material from the spine of the book. If you leave the old material on the book will simply fall apart again as it is loosened and no longer sturdy. After that was removed we put on kozo (Japanese paper) to line the spine. Below you can see the three stages. 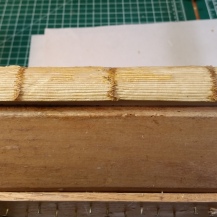 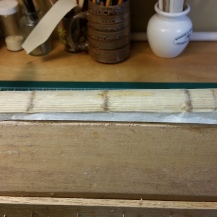 Next the spine in the case needed to be lined with kozo as well. And I fixed the wear on the head and tail of the spine with a little bit of blue kozo.

While the cover dried I went to work on the textblock once more. If you remember the first two sections were loose. These were sewn on with a simple whip stitch.

Once that was together and the it was a matter of hanging it into the case. I didn’t take pictures of the next step (oops) but it involved adding to the spine a hollow tube. This was then used to fasten the textbook to the case.  Once that was done, the loose end pages were put back on and the book was complete!

That was one book out of the three that fully completed with the four days, I have two started that didn’t get finished over the weekend. Part of bookbinding is having the patience to let things dry! Drying times kept us from getting everything done but I have the materials at home to finish them on my own time. When they are done I’ll be sure to share!

One thought on “Cloth and Paper – Repair & Restoration”

Support me on Ko-fi

If you are enjoying this content and would like to help support my bookbinding journey please consider a small tip! I’m currently saving up for a working miniature nipping press. https://ko-fi.com/ariellesbindery